For the past few years, I have been waiting to take my oldest, almost 5, to Disney On Ice. I knew she would love it, but I was worried until this year that she wouldn’t be able to sit through the entire show without having to leave early. After taking her to her first movie, I realized she was the perfect age, and I was fortunate to be able to go with a close friend –who scored tickets through work– and her son.

What was most fun is that I kept this a secret and let her know the night before the show. She was persistently asking what we were doing and after some very good guesses responded with “Mom, you can’t keep this a secret forever!” Haha.

***Spoiler Alert-I will be talking about scenes from the show. If you don’t want to know yet because you are still attending this weekend, come back to read more. There are fun pictures from the show.

Finally the night arrived, we started with a meet and greet featuring Mickey and Minnie Mouse. They were dressed in their safari clothes and did a great job with all of the different ages of kids. The pictures were cute. 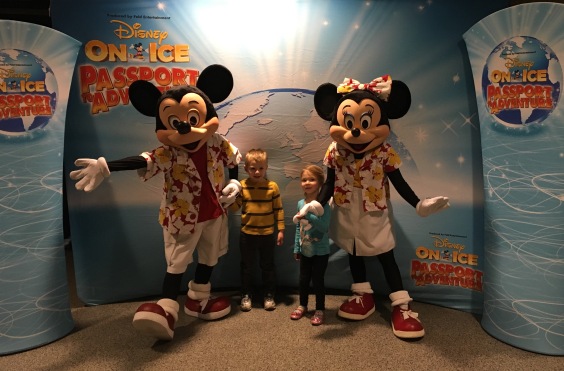 Then we had a pizza dinner with choice of drink. There was cheese, sausage, pepperoni, and supreme. For drinks, a variety of soda: Dr. Pepper, Crush, Mug Root Beer, and other Pepsi products.  Pizza is not her favorite. I think it has to do with the sauce, so most of the time she spent running around with her buddy.

With full tummies (well, mine was full), we located our seats mid arena and settled in for the show. This year’s theme is Passport to Adventure. The introduction was a “It’s a Small World After All” with people from all over the world represented. The music was fun and brought in the hosts of the show, Mickey, and Minnie. Plus some of the other favorite characters: Donald, Daisy, and Goofy.

They set the stage for one  of my all time favorite Disney movies, The Lion King, which takes place in Kenya, Africa, so that was the first place on the “passport”. All of the crew was  present including Simba, Nala, Pumbaa, Timon, and Rafiki. Pumbaa was skating around on four legs and was a fun sight to see. What I didn’t realize is that these skaters are incredibly talented. The lifts and jumps were breathtaking.

Next, was to London, England to see Peter Pan, Wendy, Captain Hook, and the Lost Boys. It was amazing to see the skaters fly through the air, and the props were fantastic in this scene. This was a segment was a bit long, but ended with a giant crocodile that ate Captain Hook and gave way to the intermission. 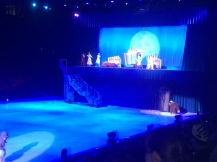 At this point, the youngin was getting a bit squirrely and claimed to be hungry, so off I went in search of a hotdog to fill her little belly and keep her at peace until the second half started. Turns out she only wanted the bun, so I ended up eating

The second half was all about princesses. We were in the Mediterranean with Ariel, Sebastian, Flounder, Ursula, and prince Eric. Of course he saves the day when he fights the larger than life Ursula. This was a much shorter clip, but built excitement for the last princes: Elsa.

The show ended in Scandinavia with the Snow Queen, her sister Anna, and Hans, Kristoff, and the loveable snowman, Olaf. At this point, my daughter leaped out of her seat in excitement and plopped herself down on my lap for the remainder of the show. Yes! Exactly what I was waiting for some love towards Mom.

Our mommy daughter date night turned out a huge success. I know there are so many of you out there who have been to Disney on Ice–especially, this year. It’s showing up like crazy  in my Facebook feed, which means you have experienced the magic it holds. I’m so fortunate to be able to have that time with her. It was precious. Now I’m just waiting a few more years until her younger sister is old enough, so we can plan our family trip to Disney World–something my husband isn’t looking forward to doing, but with two girls it’s a must. Maybe I’ll convince him if it’s Disneyland; he’s a huge fan of California.

I wanted to get this post out before the event is over this weekend. If you get a chance, it would be completely worth your time to go with your little one. Tomorrow is the last day in Green Bay, and there are still tickets on sale at the Resch Center, but they are pretty pricey based on the limited quantity. If you already have tickets or have already attended, I’m sure you have and will be making lasting memories. After all, Disney is magical.

Join 106 other subscribers
Follow 365 Days of New on WordPress.com

Check Out My Style